During the Congress, we will organize tours at the nearby archaeological cities. Fee: 49 €/person ( one day tour).

After breakfast you will start your journey towards Durres, the second largest city in Albania. Durres was a habour center of the via Egnatia, an old Roman trade route which is 20 minutes away from Tirana. The city is popular because of its over 2600 years old amphitheater which can accommodate up to 15.000 people. The beach of Durres has fine white sand and is often called the “Copacabana of the Balkan”. In Durres, you will also visit the archaeological museum to get more insight into the history.

After the sightseeing tour the journey continues towards the North to the town Kruja. The town lies approximately 560 m on the foot of the mountain Salltiku and has been populated since the third century. If the sky is clear, you have a beautiful view to the Adriatic coast from there. In the year 879, the town was firstly mentioned as a Christian center. When the famous English painter Edward Lear visited Kruja 1848 for the first time he wrote “Kruja, what a charming little town over the beautiful clouds.” In the evening you will head back to Tirana where you can enjoy your evening.

According to the requests we can organize post-Congress tours (see below).

Day 1.After breakfast you will start your journey towards Berat. The town is known as ‘the city of a thousand windows’. It was declared as a museum town and world cultural heritage by the UNESCO. The Tomorr mountain (2415m high) protects the town, which used to be the territory of the illyric tribe of the Desarettes in the 4th and 5th century BC. The city is divided into three parts; Gorica, Mangal and Kalaja. The old part of the town disposes some religious buildings, a mosque and byzantine churches. Antiquity hovers over Berat which used to be called Antipatrea.There. After lunch, the journey continues to Apollonia (12 km from Fier, 35 km from Vlora). The city was founded in the 7th century BC and colonized by Greeks from Corfu and Corinth. Apollonia used to be the center of the Illyrians and the Romans, a thriving city with a circular wall, huge antique pillars, Greek-Roman sculptures and mosaics. There, you will have enough time to explore and also visit the museum to learn more about this fascinating city. Afterwards, you will be driven to the Albanian Riviera and the coastal town Vlora, which was the most important center of the Albanian independence declaration in 1912. There, the Adriatic meets the Ionic sea. In the evening, you will have dinner in a restaurant with beautiful view over the sea. You will spend your night at a 3-star accommodation. 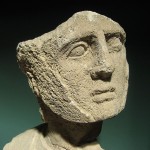 Day 2. On this day, you will visit the monastery of Zwernec in the morning and after continue your journey towards Saranda. On the way. you will see remains of the cold war like the old military port with Russian submarines. You will drive along a beautiful panoramic street to the National Park of Llogara where you will find diverse flora and fauna. One stop will be a place where you can feed deer from your hand. For lunch, you will visit the “rock art” restaurant that serves traditional food like lamb, goat on a spit and other things. After lunch, the tour continues along the serpentines up to 1200 m. Depending on the season it is recommended to bring a jacket as it might get quite cool around this area. On top of the hill a breathtaking view awaits you. From here you can even see Brindisi(I) and Corfu; an amazing scenery, especially for photographers.

The dense vegetated national park with its variety of trees, diversity of ecosystems and microclimate is unique in Europe. You can still find bears and wolves there.

For aviation sport lovers (e.g. Para gliders) the hills present the best possibilities.
The hairpin curves create interesting impressions and views and provoke a feeling as if you would enter the mountain or fall into the sea. Far below shines the blue and turquoise gleaming sea. A wild and wide riverbed with Delta flows into the sea. The tour continues through a canyon landscape with traditional villages, a lot of beautiful bays and a coastal area with olive and lemon trees. The military port and the castle of Ali Pasha are some more things you will see along the way. In Borsh you will take a traditional coffee break before going back to Saranda. In the evening you can have a nice walk on the beach promenade and delicious dinner in a restaurant that serves fresh seafood from the grill and various other culinary delicacies. 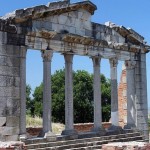 Day 3. The destination for the day will be Butrint which is located in the middle of a national park. The excavation sites show that it was a large center during the 7th and 6th century BC. In the 5th century BC it was a proper developed city. In the end of the 4th century BC it became a vibrate harbour town. The boulevard, the temple and the theatre with 1.500 seats was rebuilt and preserved until the present days. The theatrical complex and other buildings like the temple of Asclepius, the Roman baths are some of the biggest attractions in this ancient town. During the antiquity and the early Middle Ages, Butrint flourished. The construction of the Baptists is probably the most important monument of the contemporary Christian history. The granite pillars area is equipped with multicoloured geometrical mosaic art and interesting animal motives.

Gjirokastra is the next destination for this day. On the way, you will visit Gjirokastra and Syri Kalter. Firstly, you will see the “blue eyes” – a beautiful natural spring area with crystal clear water. Afterwards you will visit a Byzantine church in Mesopotami. After about 1 hour drive you reach Gjirokastra, the town of stone houses and stone-paved streets. The town is partly protected by the UNESCO. There, you will visit the ethnographic museum, the castle of Gjirokastra which is the birthplace of Enver Hoxha and the Museum of Ismail Kadare (author). You will see many splendid artistic properties which were build by different clans. Those are architectural masterpieces and definitely worth seeing. After the city tour, you can enjoy some lunch at a traditional local restaurant before continuing the tour to Tirana. There, you are free to explore the town some more and enjoy the rest of your evening.